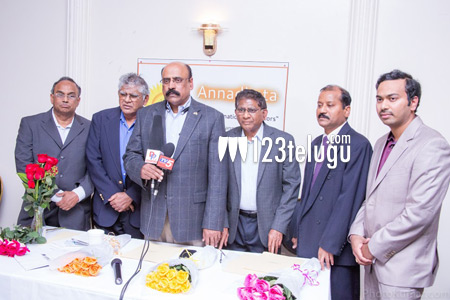 Annadhata Charities Ltd., is a registered non-profit charitable organization in USA is dedicated to assist senior citizens who are unable to support themselves in rural areas of Andhra Pradesh.

It held its first fund raising event at Pasand Indian Cuisine in Irving, TX presided by Bhaskar Reddy Padala, the President of Annadhata Charities. The invitees were received by Raja Reddy, Board of Trustee and Veera Chinta Secretary of Annadhata. Sirisha Reddy and Prasad Gujju welcomed the chief guest Dr. Prasad Thotakura, a renowned Indian American community leader and other guests and were presented with bouquets of flowers. The program began with a prayer by Saroja Reddy. Prasad Gujju moderated the meeting and presented the mission of Annadhata organization, its humble beginning, the progress, and the plans for the future. Currently nine aged needy people are currently being supported by ongoing food donation in villages Pittala Vemavaram and Annavarapadu in West Godavari district. Annadhata plans to extend food donation support to a total of 40 senior people in Maruteru, Kavitam, Penugonda, Neggupudi, Velagaleru, and Satyavaram villages in the near future.

The program received enthusiastic support of the local people in all these villages. Prasad Gujju highlighted the grand groceries distribution to about 50 needy Bhutanese and Nepalese refugees, in addition to monthly distribution of groceries through drop boxes in the Dallas-Fort Worth area during 2012-2013. He fervently appealed the audience to support the noble cause by liberal donations. Dr. Prasad Thotakura in his keynote address narrated the present real plight of the rural populations in India and the hardships they face for their livelihood. He also highlighted the particular need to feed the really needy, hungry elderly people. He appreciated the cause of Annadhata Charities and exhorted those present to donate liberally in support of the mission. The presentations were followed by a questions and answers session where several clarifications and explanations regarding the activities of the organizations were provided. The top two donors Dr. Rajendra Singh Chouhan and Srinivas Reddy Konala of U.K. were honored with bouquets.

Sudhir Medapati, the Assistant Secretary of Annadhata presented the vote of thanks. The response to the appeal for the support of organization’s mission and activities was enthusiastic. Annadhata was able achieve support from 20 life donors who have pledged to support 29 seniors every year. The event was attended by well over 100 people and several attendees contributed liberally to the cause of the organization.