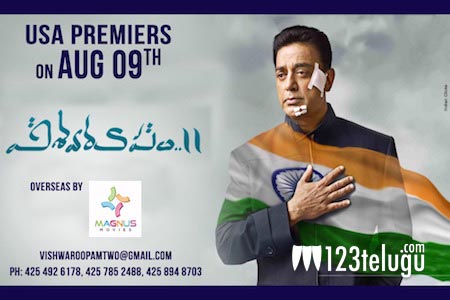 Written and directed by Kamal Haasan, it is a prequel and to the smashing hit Vishwaroopam (2013) and features himself alongside Rahul Bose, Pooja Kumar and Andrea Jeremiah, reprising their roles set to release on August 10, 2018.

Vishwaroopam 2, one of the much-awaited films of the year, is grabbing all the attention. The makers of the film have released some fresh stills from the film featuring Kamal Haasan. The actor looks terrific in the poster and this is only leaving us excited.

Speaking to the media, he said, “It is very faithful to the first part. It is not a sequel, as most people think, but also a prequel. Who is Wizam Mohammed Kashmiri will be explained in Part 2. The film will be more action-packed and entertained this time.

The trailer of the film released recently and last month, left audience impressed and only left everyone excited to know what’s in the store.

Magnus Movies is planning to release the film in more than 150+ locations across the country in the US. This is the biggest release yet for Kamal Haasan’s film in the country.

Online booking will begin in your favorite locations soon.