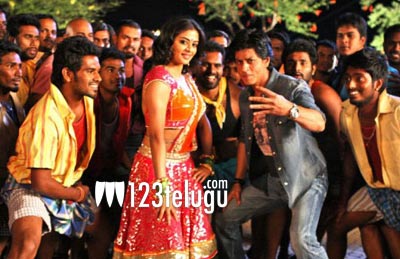 Priyamani is on a high these days. She part of quite a few films in Telugu, but more than that it’s her item number in Shah Rukh Khan’s upcoming film Chennai Express which is making waves. The song titled ‘1234’ has got a good response and Priyamani danced in this song, along with Shah Rukh Khan. The film’s audio was launched yesterday in Hyderabad and Priyamani was also invited for the event, along with rest of the lead cast and crew. The actress was more than glad to bond with Shah Rukh Khan and director Rohit Shetty at the event and tweeted, “Had an awesome time at the audio launch of # Chennai express!!!thank u @iamsrk,#rohit shetty….awesome music by @V1SH4L and @5hekhar.” In Telugu, she’ll soon be seen in a film titled Chandi.