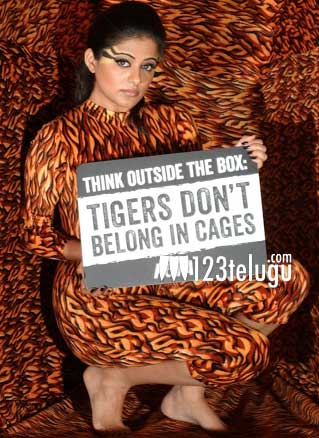 Actress Priyamani has posed for PETA’s latest campaign that talks against the cruelty shown to animals. This campaign is known for involving hundreds of celebrities worldwide and Priyamani became the latest from South India to join the brigade.

The actress is seen in a tiger striped outfit, with the caption “Tigers don’t belong in cages”. The image has been doing the rounds on social networking platforms since yesterday and it has become popular.

Priyamani is a national award winning actress and she has appeared in some big films in both Tamil and Telugu before. Over the years, she has not been a part of too many successful films and is now re-evaluating her options.