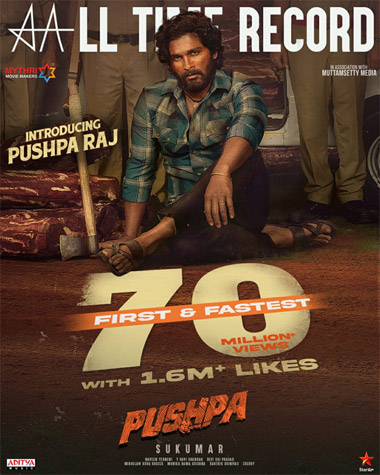 Allu Arjun and Sukumar’s highly-anticipated action drama, Pushpa, is one of the most eagerly awaited Tollywood biggies which will be hitting screens later this year. The hype and excitement surrounding this high budget pan-India film is unprecedented and it’s evident in the records the film’s teaser is setting on social media.

In a never before feat in Tollywood, Pushpa’s teaser has clocked a staggering 70 million plus views on YouTube. This is a ‘first and fastest’ record in Tollywood, claimed Pushpa’s makers in a special poster. Allu Arjun’s rugged and intense makeover as a lorry driver named Pushpa Raj and the action-packed visuals are the major highlights of the teaser.