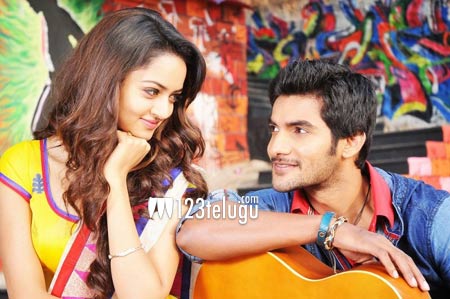 Aadi, Shanvi starrer Pyaar Mein Padipoyane is fast nearing completion and except for two songs, the rest of the film’s shooting has been wrapped up. Ravi Chavali is directing the film and it is being produced by K K Radhamohan under Sri Sathya Sai Arts banner.

The film’s teaser was launched earlier today in Hyderabad and speaking to the media, Aadi said, “After Lovely, this is my first full-fledged love story and music is a key element in the story. I can never forget the support that was extended by K K Radhamohan and we need more producers like him. Ravi Chavali has designed quite an interesting look and characterization for me.” The two remaining songs in the film are going to be shot in Kullu-Manali soon and the makers are planning to finish the censor formalities in the first week of April.

Anup Rubens has scored the music and Surendra Reddy is the cinematographer. The film is going to hit the screens soon. Apart from this film, Aadi will also be seen in Subba Reddy’s Rough and another film, Gaalipatam which is being produced by Sampath Nandi.