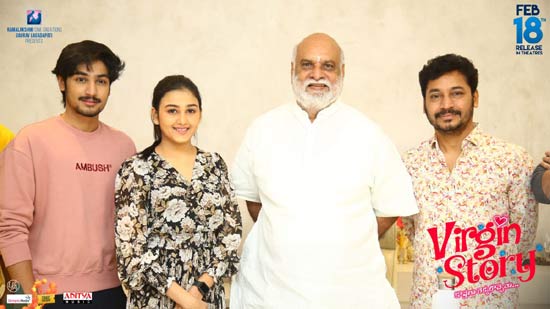 Child artist, Vikram Sahidev, who is the son of the producer, Lagadapati Sridhar, is coming to entertain the Telugu audience with his new movie, Virgin Story., from tomorrow onwards. Ahead of the release, the movie team met Darshakendra Raghavendra Rao, today.

The legendary director has launched the Hindi song titled ‘Baby I’m In Love’ and extended his best wishes to Vikram, Lagadapati Sridhar and heroine Sowmika Pandiyan. Composed and crooned by Achu Rajamani, the song has the lyrics penned by the movie’s director, Pradip B. Atluri.

Produced under the banner, Ramalakshmi Cine Creations, Virgin Story has Jeeva, Thagubothu Ramesh, Bhadram and others in key roles. Anish Tharun Kumar has cranked the camera for this youthful movie.