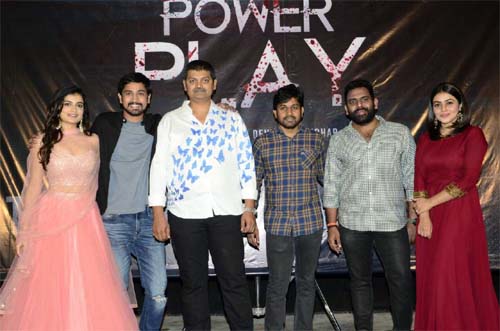 Young hero Raj Tarun has teamed up with his Orey Bujjiga director Vijay Kumar Konda for an action thriller, titled Power Play. Also starring Poorna, Prince and Hemal in lead roles, the film has completed all the post-production formalities and is slated to open in cinemas worldwide on March 5.

Power Play will be getting a decent release across the twin Telugu states by noted Nizam distributor Warangal Srinu and several overseas destinations. While Great India Films is releasing the movie in the USA, Southern Star International has acquired the Australia theatrical rights and Manu will release the film in the Middle Eastern regions.

With Power Play, Raj Tarun and Konda Vijayk Kumar are hoping to strike big at the box-office. The film will showcase talented actress Poorna in a negative role. The film also features an ensemble cast, including Kota Srinivas Rao, Ajay, Madhunandan, Ravi Varma and others. Presented by Padma, Power Play has been produced by Mahidhar and Devesh under Vanamalee Creations banner.