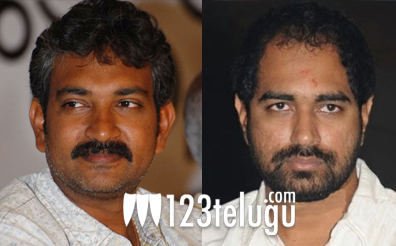 S S Rajamouli is mighty impressed with the storyline of Krish’s upcoming film Shivam. The film will star Mahesh Babu in lead role and both Krish and Mahesh Babu have already confirmed that they’ll team up in future for this project. Earlier today, Rajamouli and Krish met at the airport while they were on their way to Mumbai. As they got talking about movies, Krish reportedly told Rajamouli about the story he had written for Mahesh Babu. Rajamouli was so impressed with the story that he even tweeted about it saying, “Met krish on flight to mumbai.he narrated his next film plot.Obviously i cannot reveal it,but mahesh fans are in for a fantastic experience.” Recently, there was a buzz that Sonakshi Sinha might be roped in for this eagerly awaited film. Ashwini Dutt is going to produce it and it’ll be simulatenously released in Telugu and Tamil.