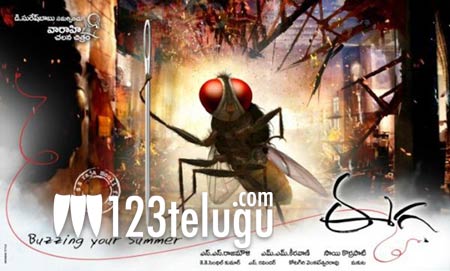 Ace Director S.S. Rajamouli’s ‘Eega’ has bagged the National Award for Best Special Effects. This is a proud moment for Telugu Cinema, which usually comes back empty handed when it comes to National Awards.

‘Eega’ was also selected as the Best Regional Film, takings its tally to two National Awards. This is the maiden production venture of Varahi Cinema, headed by producer Sai Korrapati. Daggubati Suresh Babu acted as the presenter for the movie.

‘Eega’ was a major Box Office success of 2012. The movie had Nani, Samantha and Sudeep in lead roles. Music director M.M. Keeravani scored the tunes and Rama Rajamouli designed the costumes. S.S. Kanchi was credited as the script doctor.

Congratulations to S.S. Rajamouli and the team of ‘Eega’.