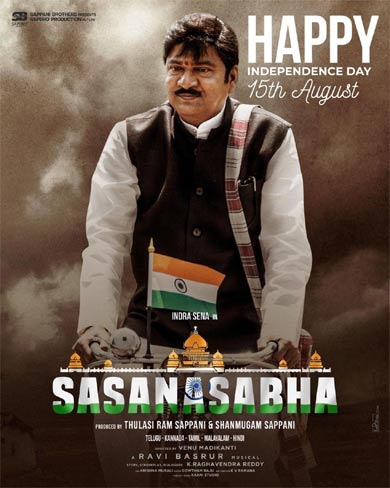 In July, the makers of Sasanasabha revealed the motion poster of the film and it received an overwhelming response. The pan-Indian political movie has Indra Sena as the protagonist.

As today is Independence Day, the makers have felt that this is the right occasion to reveal the first look poster of the veteran actor Rajendra Prasad. He is playing Narayana Swamy, an honest and true leader who would be a Member of the Legislative Assembly. He will play his finest character in this film, as he has done in previous roles. This character will be the highlight of this pan-India political film.

Sonia Agarwal, Prudhvi Raj, Jabardasth Apparao, Anish Kuruvilla, and Amit are also a part of the film. Gorgeous beauty Hebah Patel is also going to mesmerize everyone in a special song.

Under the Sapbro Production Pvt Ltd brand of Sapbro Group, Thulasi Ram Sappani and Shanmugam Sappani, also known as the Sappani Brothers, are bankrolling Sasanasabha. This movie is directed by Venu Madikanti, who is most known for his work on Venkatapuram. Ravi Basrur of KGF fame is the music director for this movie.