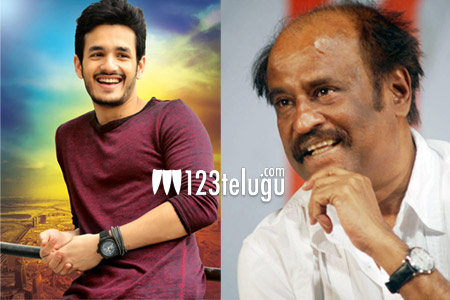 If the latest reports from Tamil media circles are to be believed, Superstar Rajinikanth will be introducing the handsome Akkineni lad, Akhil, to Tamil audiences in a special event in October. It is well known that the Tamil version of Akhil’s debut film will be released by C Kalyan.

Apparently, C Kalyan is planning a huge event in Chennai to launch Akhil. However, Rajini is yet to confirm his participation in this grand launch. Already, Bollywood star Salman Khan and Telugu Superstar Mahesh Babu launched Akhil Akkineni with the film’s teaser and the audio album respectively.

Meanwhile, Akhil, starring Akhil Akkineni and Sayyeshaa Saigal, the grand niece of legendary Bollywood thespian, Dilip Kumar, is in the last leg of its shooting part. The film will release on 22nd October.