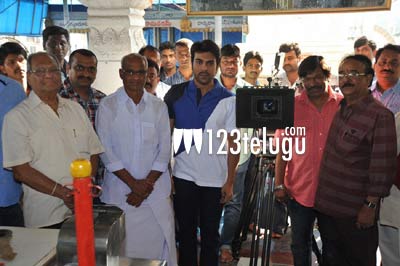 The muhurtham ceremony of Mega Power Star Ram Charan’s film in Krishna Vamsi’s direction was held today morning. The film is being produced by star producer Bandla Ganesh and regular shooting will go on for three days in Hyderabad. After this schedule, the film will shift to a few areas in Tamil Nadu like Pollachi, Nagercoil etc for 40 days.

Ram Charan and Kajal Aggarwal will be seen as the lead pair in this movie. Veteran actor Srikanth and Kamalinee Mukherjee will be seen in important supporting roles. The film also has well known Tamil actor Raj Kiran in the role of a grandfather.

This untitled movie is expected to be a big budget family entertainer and producer Bandla Ganesh is very excited about the project.