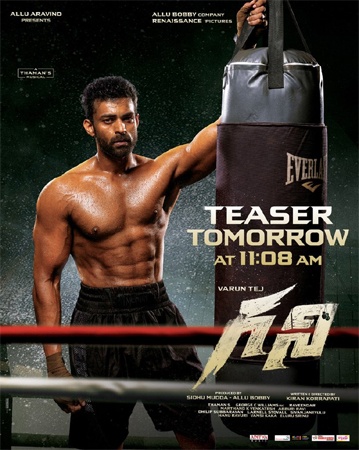 The much-awaited teaser for Varun Tej’s Ghani will be out tomorrow (Nov 15) at 11:08 AM. And just a day ahead of the teaser launch, the film’s makers revealed that Varun’s cousin Ram Charan has done a voice-over in the teaser.

Ghani is a sports drama based on boxing, and Varun will be seen as a boxing champ in it. He has developed a stunning 6-oack physique to look his role. Bollywood starlet Saiee Manjrekar plays Varun’s love interest, while Kannada star Upendra, senior Bollywood actor Suniel Shetty and star character artiste Jagapathi Babu will be seen in key roles.

Ghani is directed by debutant Kiran Korrapati and produced by Allu Venkatesh and Siddhu Mudda. Thaman is the music composer. The film is scheduled for a December 3rd release.