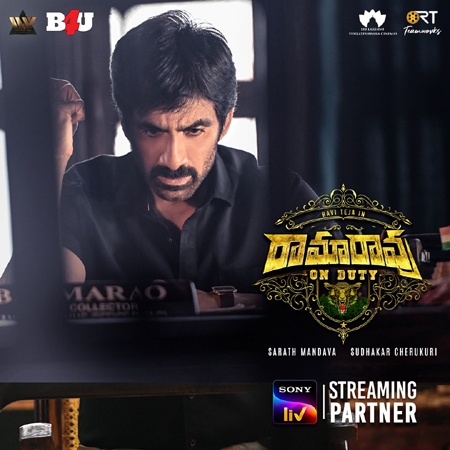 Mass Maharaja Ravi Teja is busy doing back-to-back movies and Ramarao On Duty is one of them. Written and directed by debutant Sarat Mandava, the unique thriller has Divyansha Kaushik and Rajisha Vijayan as the female leads.

Now, the latest news is that Sony LIV has bagged the digital rights of the movie for a whopping price. The OTT platform has officially posted the same on its social media profiles. Also, earlier today, the makers have confirmed that the movie’s teaser will be out on March 1, 2022.

Actor Venu Thottemupudi will be seen in a crucial role in Ramarao On Duty which also has Nassar, Tanikella Bharani, Pavitra Lokesh and others.

Bankrolled by SLV Cinemas and RT Teamworks, this movie has the music of Sam CS. The film is in the last leg of shooting and the release date is expected to be announced on March 1 alongside the teaser release.