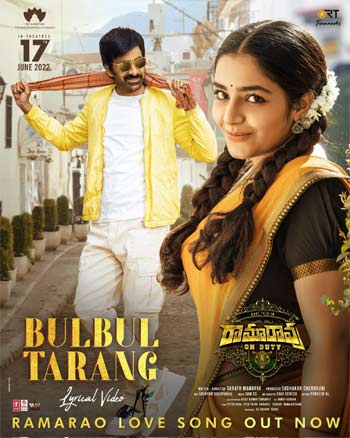 Mass Maharaja Ravi Teja is coming to entertain his fans and audiences with another unique thriller. Titled Ramarao On Duty, the movie is helmed by Sararh Mandava.

Today, on the occasion of Rama Navami, the makers have released the first song from the movie. Composed by Sam CS, the song has the marvellous vocals of the happening singer, Sid Sriram. The song is so good to listen and the visuals look lovely. The love song has the lyrics penned by Rankendu Mouli.

Produced by SRT Cinemas and RT Teamworks, the movie has Venu, Nassar, Tanikella Bharani and others in pivotal roles. Divyansha Kaushik and Rajisha Vijayan are playing the female leads in this movie, which is scheduled to hit screens on June 17, 2022.