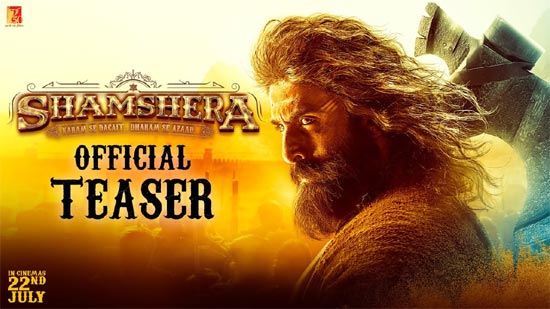 The recently released first-look poster of Ranbir Kapoor’s upcoming film Shamshera has received a good response from the audiences. Today, the makers have unveiled the official teaser of the movie.

The teaser looks intriguing. The rich visuals, background and dialogues have raised the expectations on the film. The teaser showcases the star actor Sanjay Dutt as a ruthless person, Shudh Singh, who enslaved and tortured a warrior group in the city of Kaza. How a slave becomes a hero and fights for his people forms the crux of the story.

Directed by Karan Malhotra, the movie has Vaani Kapoor as the female lead. Produced by Aditya Chopra of Yash Raj Films, the epic movie has Ashutosh Rana, Saurabh Shukla, Ronit Roy and Tridha Choudhury in supporting roles. The film will hit screens on July 22, 2022, in Hindi, Telugu and Tamil, worldwide.