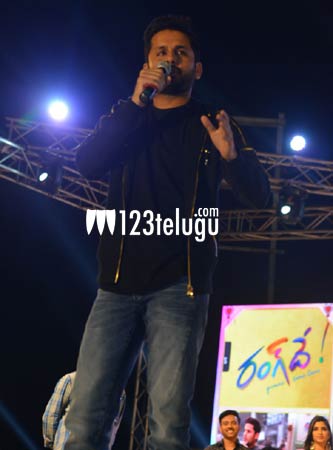 The theatrical trailer launch event of Nithiin and Keerthy Suresh’s soon-to-release romantic comedy, Rang De, was held in Kurnool tonight. The fun and breezy trailer has already become a talking point and raised the expectations on the movie.

Speaking at the event, Nithiin said that it’s a general perception that Rayalaseema is famous for mass and faction films. “But I witnessed immense love here and we are arriving with a pure love story on March 26th. Watch ‘Rang De’ with the same love and bless me and my team,” he said.

Nithiin also thanked Kurnool MLAs Hafeez Khan and Sudhakar, Commissioner and DG Bharat for launching the trailer. He also clicked selfies with his fans, and the photographs are now going viral on social media. Rang De has been directed by Venky Atluri and produced by Naga Vamsi.