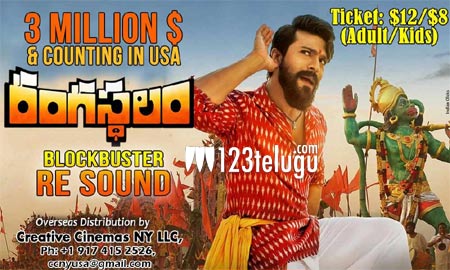 Rangasthalam, the Ram Charan and Samantha-starrer period village drama, has set a rare record in the US. On Saturday, the film crossed the $3 million mark to become the third highest grossing Telugu movie of all-time in the US.

Earlier, Baahubali 1 ($6.8M) and Baahubali 2 ($11.8M) are the only two movies that pulled off this staggering feat. Rangasthalam is still posting over $200K over the weekends and it remains to be seen if the film will manage to surpass the $3.5M mark with Nani’s Krishnarjuna Yuddham releasing on April 12.