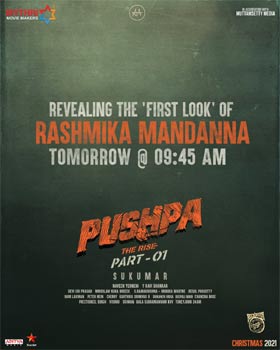 Pushpa is one film that many are waiting for eagerly as it has Allu Arjun in a never before seen role for the first time in his career.

Rashmika plays the female lead in this film and she will also don a special look. The spectacular look of Rashmika will be out tomorrow morning at 9 45 am.

The film is almost done with its shoot and the makers are in plans for a Christmas release this year. Sukumar directs this film which also has Fahadh Faasil as the heroine.