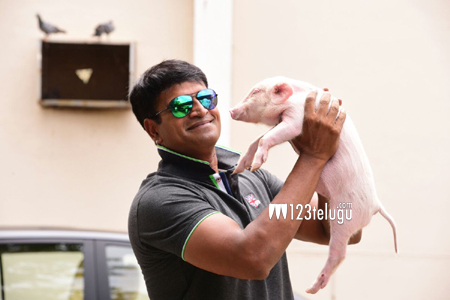 Known for his out of the box ideas and innovative filmmaking, actor-filmmaker Ravi Babu is ready with his next film titled Adigo. Unlike most of his films, Adigo is worlds apart and treads a completely new shores of filmmaking.

Ravi Babu centred the entire film on a piglet. Yes, you heard it right. After realising that it will cost him a bomb to import the animatronics technology to make this film as he desired, Ravi Babu designed an indigenous software that combines animatronics, animation and live action to simulate his protagonist, the piglet, after a grueling trial and error process.

Once he got his piglet ready, Ravi Babu commenced the shoot in March and completed the entire shooting part within three months. Currently, the film is in the post-production phase and the director is planning to release it soon.