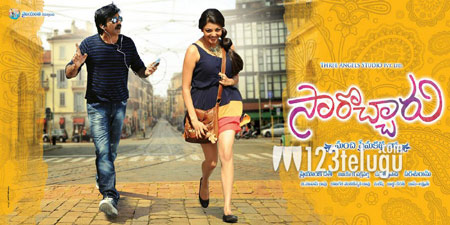 Ravi Teja has so far playing quite a few entertaining and energetic roles, but none of them are as soft as the one he’s playing in Sarocharu. In a recent interview to a newspaper, director Parasuram revealed that Ravi Teja is playing the role of a football coach, which is a first in the actor’s illustrious career. Talking about the film, Parasuram said, “Every girl has her own dreams about how her prospective husband or lover should be. Sarocharu is one such film in which both the actresses fall in love with the hero, but in the end, only one girl succeeds in winning his heart. You’ll have to watch the film to find out who that lucky girl is.” Kajal Aggarwal and Richa Gangopadhyay have played the lead roles opposite Ravi Teja and Nara Rohit will seen in a special role. Priyanka Dutt has produced the film under Three Angels Studio Pvt Ltd banner and Ashwini Dutt is presenting it under Vijayanthi Movies banner. Devi Sri Prasad has composed the music and Vijay K Chakravarthi is the cinematographer. The film will hit the screens on December 21.