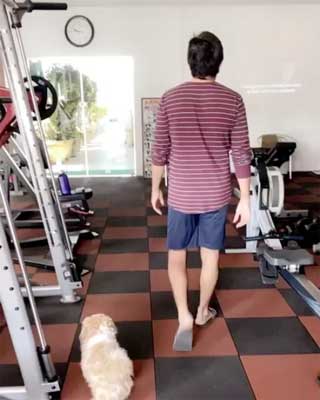 Hero Ravi Teja has been spending some blissful time with his family members during the lockdown. Pictures and videos of the Mass Maharaj having fun times with his son and daughter and even while he was hitting the gym made a splash on social media a few days ago.

Now, an adorable video of Ravi Teja’s pet dog wagging its tail as it follows him in his gym is winning the hearts of his fans. The actor is currently working on Gopichand Malineni’s action entertainer, Krack. He also has Ramesh Varma’s film, Trinadha Rao Nakkina directorial and a couple of exciting projects lined up later this year.

The only thing he knows is loving unconditionally.🐾❤️