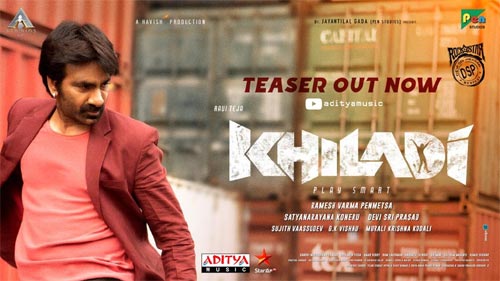 The much-awaited teaser for hero Ravi Teja’s upcoming action entertainer, Khiladi, has been released this morning. The grand and action-packed teaser literally teases fans with intriguing visuals and finally surprises with a twist in the end. The slickly cut teaser showcases Ravi Teja’s dual roles, but doesn’t give away any hint of the story.

Khiladi features young beauties Meenakshi Chaudhary and Dimple Hayathi as the female leads. Senior hero Arjun plays a key role in the movie, while Anasuya Bharadwaj also makes a brief appearance in the teaser. This high budget film is being directed by Ramesh Varma and produced by Koneru Satyanarayana and Jayantilal Gada. Devi Sri Prasad is the film’s music composer. Khiladi is confirmed for a May 28th release.