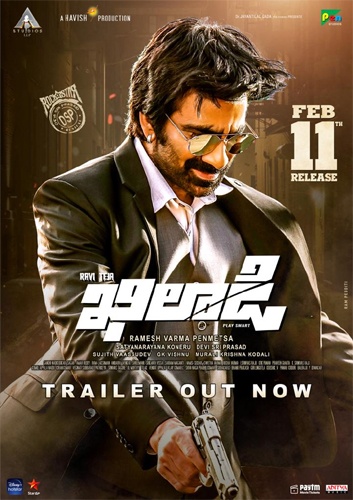 Finally, the much-awaited trailer of Mass Maharaja, Ravi Teja’s Khiladi is out today. Written and directed by Ramesh Varma, the movie is bankrolled by A Studios and Pen Studios.

The trailer looks very intriguing and is power-packed with action sequences and Ravi Teja’s dynamic performance. It seems that the action crime thriller is about money laundering. Though the actor is the protagonist, his character has negative shades. The catchy dialogues, rich visuals and energetic background score make the trailer look more interesting.

Actors Arjun Sarja, Rao Ramesh, Mukesh Rishi and Anasuya are playing significant roles in Khiladi. The movie which has Dimple Hayathi and Meenakshi Chaudhary as the leading ladies is also releasing in Hindi on February 11, 2022. Devi Sri Prasad’s music is going to be mesmerised in this movie.