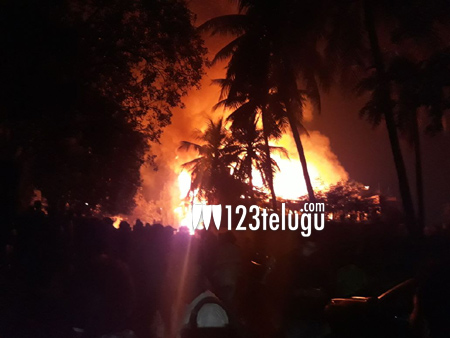 We have reported earlier that a major fire mishap took place at Annapurna Studios this evening. A huge house set where the Akkineni classic, Manam, was shot, was completely gutted in the fire. Nagarjuna was present in his office when the incident happened and he immediately rushed to the spot to oversee the preventive measures.

As per the preliminary witnesses, a group of students belonging to the Annapurna Film School were shooting a short film in the premises. The fire was caused due to the short circuit while the assembling of electric cables. All the students fled the spot as soon as the fire engulfed the entire set.

Even though there were no casualties, expensive solar panels that were installed on the set’s terrace were severely damaged, resulting in a huge loss to the tune of around 1 crore. Stay tuned for more updates.