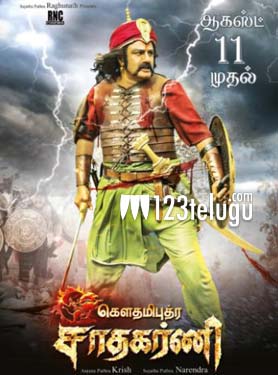 It is well-known that Balakrishna’s landmark 100th film, Gautamiputra Satakarni, is going to be released in Tamil. The Tamil version’s audio album was unveiled a week ago in Chennai.

As per the latest updates, Gautamiputra Satakarni’s Tamil version will be hitting the screens on August 11. This means that the film will have a tough competition from Dhanush’s VIP 2, which is releasing on the same day.
GPSK was directed by Krish. Shriya and Hemamalini were seen in important roles in this historical biopic. Producer Narendra is going to release the film in nearly 300 screens.