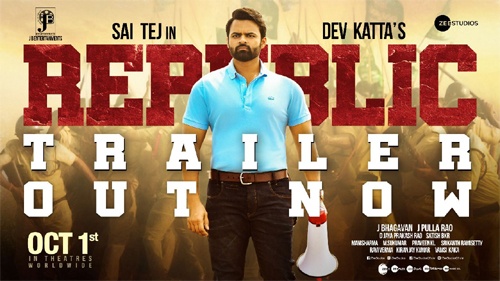 Republic is a film that many are waiting for as it has mega hero Sai Dharam Tej in a new avatar for the first time in his career. The makers have released the theatrical trailer and it looks intense.

Director Deva Katta is known for his drama and the trailer is filled with good intense moments and emotional outbursts.

Sai Tej plays this sincere collector who takes on the corrupt politicians. The presence of bigwigs like Ramya Krishna also enhances the proceedings big time.

Jagapathi Babu is seen as Tej’s father and the trailer has some very good dialogues. The BGM is amazing as Mani Sharma lifts the scenes with his music.

Aishwarya Rajesh is seen in a key role in this film which will be out on October 1st all over.