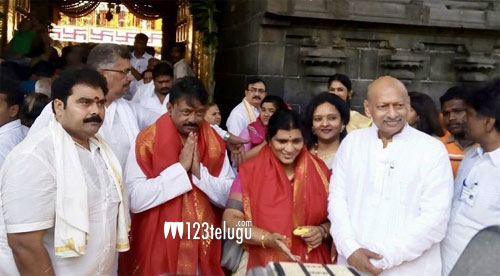 Whatever RGV does it becomes a sensation of sorts. He is also making a biopic on the life of NTR which will be narrated through the view of NTR’s wife Lakshmi Parvathi.

The film has been named Lakshmi’s NTR and today, RGV posted a picture after doing a special puja in Tirumala. What’s special is that RGV, who is an atheist visited a temple for the first time in his life.

He posted a picture and said ” This is what NTR did to me for the sake of Lakshmi’s NTR. Later today, RGV is going to hold a press conference and announce the film officially.

The star cast of the film is also said to be announced today. Watch out this space for more updates on this project.