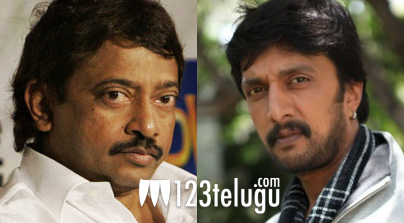 RGV is all set to direct a multi-lingual film with Sudeep in lead role, according to the latest buzz in film industry. The two had earlier teamed up for Phoonk and Rann, a film which dealt with how media functions. Incidentally, Rajamouli spotted Sudeep in Rann and offered him the negative role in Eega which made Sudeep a sensation overnight in Telugu. Now, RGV is planning to direct a film with Sudeep in Telugu and Kannada and the film is likely to be dubbed in Tamil and Hindi later on. More details about the film will be announced soon. Currently, RGV is busy wrapping up his upcoming film The Attacks of 26/11 and Sudeep will soon be seen in a special role in Anil Sunkara’s upcoming film Action (3D).