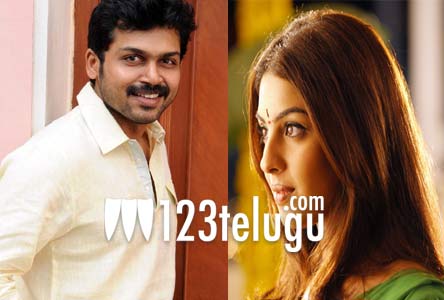 Richa Gangopadhyay seems to be on signing spree these days. In the past few months, she has been quite careful when it comes to choosing her films and all of a sudden, she signed three new films. We had already reported that she’s part of Ravi Teja’s Sir Vasthara and Nagarjuna’s Bhai. The latest news is that she’ll all set to team up with Karthi in a Tamil film titled Biryani. Venkat Prabhu is going to direct the film. Earlier, names of Ileana, Parineeti Chopra and Kajal Aggarwal were doing rounds; however, Richa had the last laugh. “okay okay fine, so i’ll tell you now…. next up for me…*fanfare*: Venketprabhu’s ‘Biryani’ w Karthi in Tamil/Telugu, and Veerabhadram’s ‘Bhai’ w Nagarjuna in Telugu. #happyhappy #worththewait,” Richa posted on Twitter. She’ll soon join the sets of Ravi Teja’s Sir Vasthara in Ooty before she starts shooting for Bhai.