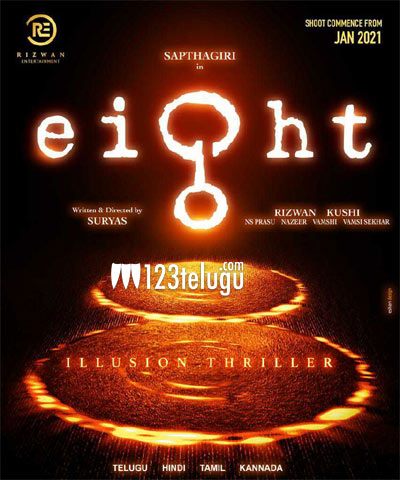 Comedian Saptagiri has been making some interesting films as a hero. Now, the latest update is that Rizwan Entertainment will be making their production no 4 with Sapthagiri.

Titled Eight, the film is a multi-lingual film being made in Telugu, Tamil, Kannada, and Hindi languages with Surya S directing it. Billed to be an illusion thriller, the film is produced by Rizwan, while Kushi is the co-producer.

The title Eight sounds interesting, wherein the poster looks captivating. Nazeer handles the cinematography, while music for the film is rendered by NS Prasu. Vamsi is the editor. The regular shoot of Eight commences from January.

Also, Rizwan Entertainment’s other production ventures Super Machi with Kalyaan Dhev and Sundari with Poorna is ready for release.