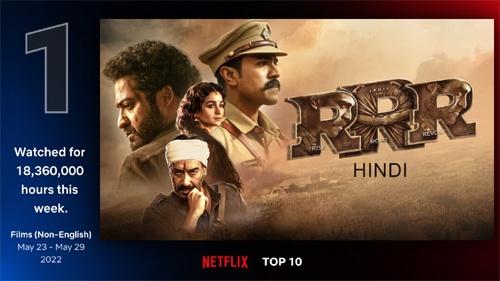 SS Rajamouli’s magnum opus RRR, starring Ram Charan and Jr NTR, is continuing its rampage even after its OTT debut. The film’s Hindi version was released on Netflix on May 20, 2022.

Since then, the biggie has been winning the hearts of millions of foreigners. Many filmy personalities across the globe have watched and praised the action drama. Now, the latest news is that the movie has topped the global charts of Netflix in the non-English movie category.

According to Netflix, the epic movie was streamed for more than 18 million hours on the OTT platform from May 23 to May 29, 2022. With this, RRR has become the most watched non-English film on Netflix globally. Besides, it is also trending in the top 10 in more than 60 countries.

RRR also has Alia Bhatt, Ajay Devgn, Samuthirakani, and Olivia Morris in pivotal roles. Produced by DVV Danayya on a grand scale, the pan-India movie grossed more than Rs. 1100 crores at the global box office. MM Keeravaani is the music director for this movie.

RRR is officially the #1 most watched non-English film on Netflix! pic.twitter.com/XbeXzb9KGQ