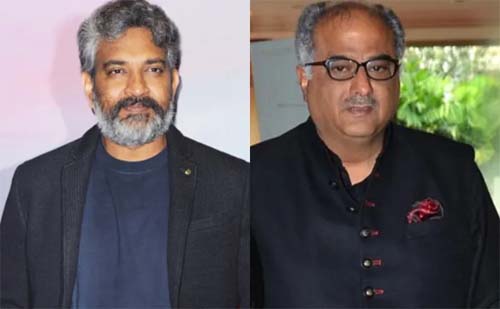 The makers of Rajamouli’s pan-Indian multi-starrer, RRR, recently announced that the film will be hitting screens on October 13 as a Dasara festive treat. Needless to say, fans and trade circles who have been eagerly waiting for this high budget period drama are rejoicing with the announcement.

On the other hand, veteran Bollywood producer Boney Kapoor, who’s currently bankrolling Pawan Kalyan’s Vakeel Saab, is deeply upset with Rajamouli. And the reason is that RRR is in a direct clash with Boney’s pan-Indian sports biopic, Maidaan, which was scheduled for an October 15th release long back. Incidentally, both RRR and Maidaan feature Bollywood star Ajay Devgn.

In a latest interview with a popular national news daily, Boney Kapoor called Rajamouli’s move ‘unethical’. “Rajamouli has made a big name for himself after the two Baahubali films he directed. In that context, I wonder why a Rajamouli film, after Baahubali and Baahubali 2, needs a holiday weekend?,” Boney said.

Boney went on to say that Ajay had a word with Rajamouli about averting the possible clash, but Rajamouli told him that the release date ‘was not in his hands because he had played no role in this and it is entirely between the RRR producer and distributors’. Apparently, Ajay was not made aware of RRR’s announcement until a day before it was made. “Ajay didn’t even share the RRR announcement on social media, Boney said.”