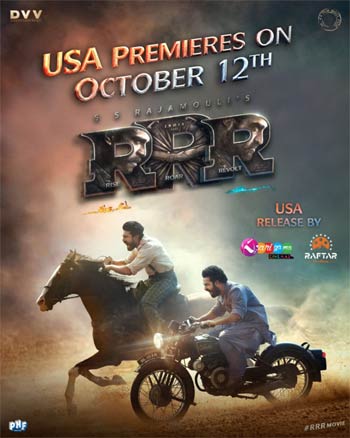 RRR is one film that is the most-awaited in the country. Post Baahubali, everyone wants to see what Rajamouli is up to with his period drama.

As the film has Ram Charan and NTR, things have gone to another level altogether. RRR is all set for a release on the 13th of October and will have its US premiere on the 12th.

There is a solid hype for this film and the update is that Saregama Cinemas and Raftaar Creations have jointly bagged the US rights of the film.

They are planning a massive release on the 12th on a record number of screens. The talk is that these two banners have shelled a bomb for the rights of the film. RRR is produced by DVV Danayya.