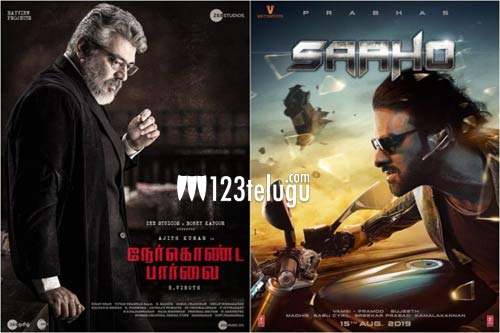 But, speculations are rife that Nerkonda Paarvai maybe preponed and the film may hit theaters in the last week of July. Apparently, the reason behind this latest development is Saaho. The Prabhas-starrer is hitting screens on August 15 in Tamil along with its Telugu and Hindi versions.

Nerkonda Paarvai is an intense and emotional drama, while Saaho is an out-and-out action entertainer. Naturally, it will be advantage Saaho at the box-office while Nerkonda Paarvai may struggle to secure more number of screens once Saaho releases.

Also, Suriya’s action thriller, Kaappaan, releasing on August 10 is another challenge for Ajith’s film. However, we will have to wait for an official announcement regarding the release date from Nerkonda Paarvai’s team to confirm this buzz.