Sai Dharam Tej reveals why did not campaign for Janasena
Published on Apr 9, 2019 7:00 pm IST 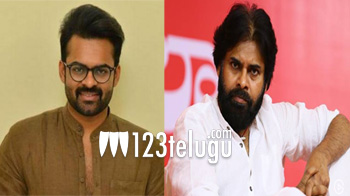 Sai Dharam is in a crucial stage of his career as his much-awaited film, Chitralahari is ready for a release soon. Tej today, visited Tirumala to pray for the success of his film and spoke to the media.

On being asked why he did not campaign for his uncle Pawan Kalyan, Tej said that he had called his uncle to lend his support in the form of a campaign but the latter asked him to concentrate on his film career which is in a do or die situation.

Tej ended by saying that he is always there for his uncle and wished the best for him in the upcoming elections.