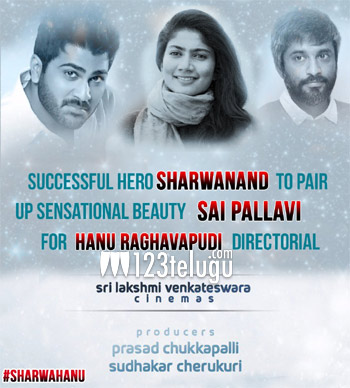 Fidaa beauty Sai Pallavi has scored her second hit in Tollywood with MCA. The craze and expectations on her upcoming movies will further escalate from now on. 123telugu.com had earlier reported that Sai Pallavi will next be romancing Sharwanand in a film to be directed by Hanu Raghavapudi.

As per the latest updates, the Sai Pallavi-Sharwanand movie will go on floors from January 20. The first schedule is expected to take off in Nepal. Hanu is said to have penned an intense love story. Prasad Chukkapalli and Sudhakar Cherukuri are producing the film under Sri Lakshmi Venkateswara Cinemas banner. KVPG composer Vishal Chandrasekar is going to score the music.