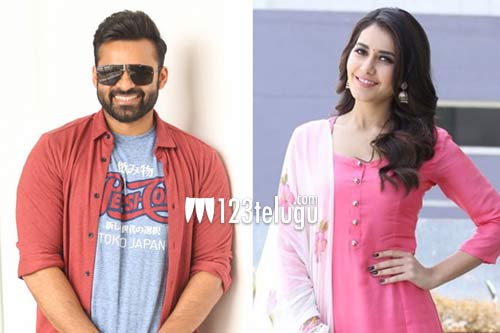 Mega hero Sai Tej’s new film had its official launch a couple of days ago. The film will be directed by Deva Katta and features talented Tamil actress Nivetha Pethuraj as the female lead. And here’s an interesting speculation.

Apparently, this as-yet-untitled film also has room for another actress and that the makers have zeroed in on popular heroine Raashi Khanna for the part. However, we will have to wait until the makers come up with an official announcement to confirm this buzz.

In the past, Sai Tej and Raashi Khanna paired with each other in two super hit films, Supreme and the recent blockbuster, Prati Roju Pandaage. The upcoming film will mark their hat-trick collaboration, if the latest buzz turns out to be true.