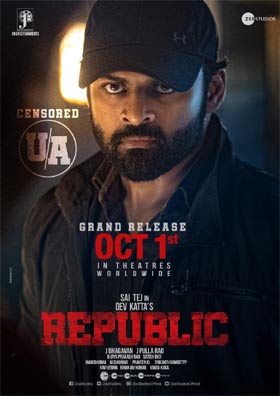 The suspense on the release date of hero Sai Tej’s upcoming social drama, Republic, has ended finally. The film’s censor formalities have been completed earlier today and the CBFC has cleared the film with a UA certificate. As announced earlier, Republic will be opening in cinemas worldwide on October 1.

In Republic, Sai Tej will be seen as a dutiful district Collector named Panja Abhiram. Scenes featuring Sai taking on the corrupt people and the system will be quite riveting in typical Deva Katta style. The film also stars Aishwarya Rajesh, Jagapathi Babu and Ramya Krishna in key roles.

Bhagwan and Pullarao have jointly bankrolled Republic. Manisharma is the music composer. Zee Studios is releasing the film on a grand scale.