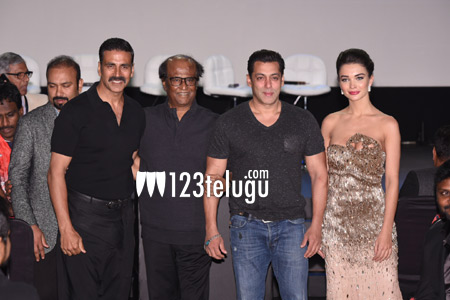 Bollywood star hero Salman Khan graced the event and shared screen space with the team members. The interesting aspect is that Salman was not invited to the event at all.

After knowing that Rajni and team were launching the first look he decided to attend the event taking the whole unit into surprise.

Salman Khan, who is a huge fan of Rajni said that he just came to meet Superstar Rajini. 2.0 has Amy Jackson as the female lead and Akshay Kumar will be seen as an antagonist.