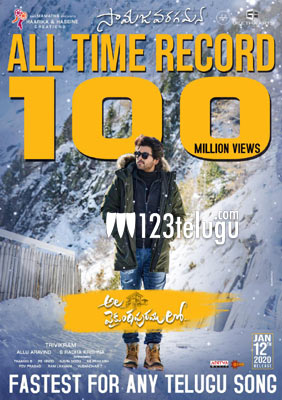 There’s no stopping Samajavaragamana, the first single from Allu Arjun and Trivikram’s Sankranthi family entertainer, Ala Vaikuntapurramuloo. Released on September 27th, this chartbuster romantic melody has clocked over 100 million views with more than a million likes on YouTube.

With this, Samajavaragamana has set a new record by any South Indian film song for clocking 100 million views within a short time. This breezy love song is penned by the legendary Sirivennela and sung by singing sensation Sid Sriram. Music composer Thaman has been churning out one hit after the other, as even Ramulo Ramulaa from the film turned out to be a massive success.

Also starring Pooja Hegde, Tabu, Nivetha Pethuraj, Navdeep and Sushanth in lead roles, Ala Vaikuntapurramuloo is being produced by Allu Aravind and S Radhakrishna. The film is slated to hit screens on January 12.