For the past few days, Rakul Preet’s name has been linked to the drug scandal in Bollywood. Several unverified reports aired in the media claimed that Rhea Chakraborty named Rakul, Sara Ali Khan, and a few others during the ongoing investigation by Narcotics Control Bureau.

However, NCB has not issued any official statement in this case. A leading website has quoted NCB deputy director KPS Malhotra, who said, “We have not prepared any Bollywood list. The list earlier prepared was of peddlers and traffickers. It’s getting confused with Bollywood. The names have not been zeroed upon.”

This report has now gone viral on the internet, and Samantha is among the few celebrities from Telugu film industry who have come in support of Rakul. Sharing the news report on Instagram, Samantha voiced out her support for Rakul and her fans have started trending #sorryRakul on social media to highlight how Rakul is being dragged into the issue because of unverified reports. 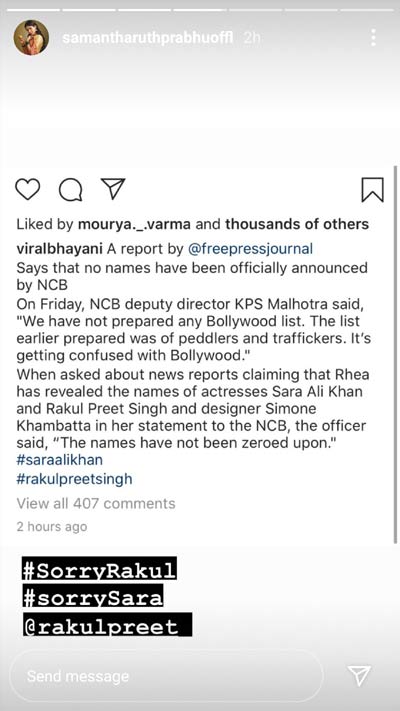