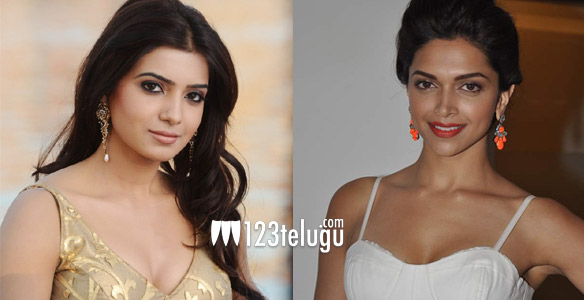 Samantha and Deepika Padukone, two of the biggest actresses in Tollywood and Bollywood respectively, have plenty of things in common. Although their personalities might differ a lot, but if you observe closely you’ll realize that their respective careers have followed similar trajectories.

Both of them are considered as a ‘lucky charm’ and are currently ruling the roost with back to back hits and plenty of work in hand. Moreover, Deepika Padukone has played the lead role in Chennai Express, which became the biggest blockbuster ever in Hindi cinema. Similarly, Samantha played Pawan Kalyan’s romantic interest in Atharintiki Dharedhi which smashed every record there was in Telugu cinema history.

Now, these two lead actresses will have one more thing in common, if the latest rumours in Bollywood are anything to go by. Deepika Padukone is reportedly in talks with Lux to be its new brand ambassador and an official announcement is likely to be made soon. On the other hand, Samantha has already been signed up to be the new face of Lux in Andhra Pradesh and few weeks ago, she shot for an ad for this brand, along with Siddharth. It’s quite an interesting coincidence. What say folks?