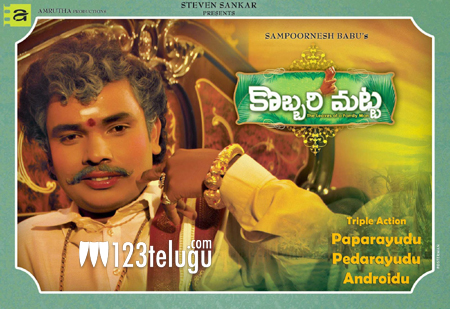 ​Social networking star Sampoornesh Babu, is making positive strides in the industry. He has a host of films lined up and one among them is Kobbari Matta. This satirical film is nearing completion and according to the latest update, Sampoornesh has crooned for a number titled ‘Kobbari Pullalu Kalagalipe’ which is going to be released next week.

Sampu is also busy doing comedy roles in other films as well. He will next be seen in Allari Naresh’s Bandipotu and as a main lead in Singham123 which is produced by Vishnu Manchu. Kobbari Matta is produced by Adi Kumbhagiri and directed by Rupak Ronaldson.