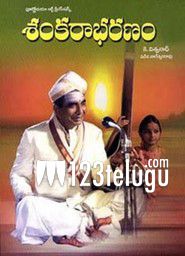 The dubbed version of the iconic Telugu cult classic, ‘Sankarabharanam’ will be releasing in Tamil next Friday. Made in 1980, ‘Sankarabharanam’ redefined the magic of Indian classical music and carved itself a permanent position in the hearts of Telugu film lovers. The film stars JV Somayajulu , Manju Bhargavi, Thulasi and Allu Ramalingaiah in important roles.

Directed by the legendary auteur K Viswanath, the film showcases the plight of a classical music exponent in the times of westernization. Produced by Edida Nageswara Rao under the prestigious Purnodaya Movie Creations banner, the film went on to become a blockbuster and even won National Awards for Best Music Direction, Playback Singing for Male and Female and the coveted Golden Lotus for Wholesome Entertainment. CNN-IBN also placed ‘Sankarabharanam’ in the list of top 100 movies of all-time in India.

The film has been restored digitally and dubbed into Tamil by Sri Sabarigiri Vasan Movies. This is indeed a golden opportunity for film lovers to revisit the historic film on the big screen.