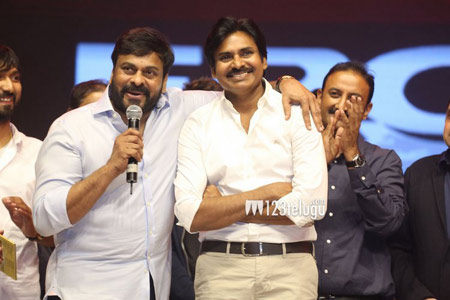 It was a very special day for all the fans of Megastar Chiranjeevi and Power Star Pawan Kalyan yesterday. Last night witnessed the grand reunion of the Mega brothers on the same stage after several years. Chiru was the chief guest at the event and he unveiled the film’s audio album.

Speaking on the occasion, Chiru said that he is extremely happy and proud of his younger brother’s success. Chiru also said he wasn’t happy with Pawan’s recent statement of taking a break after acting in 2, 3 films and asked him to continue to enthrall his fans even though he wishes to pursue his other passion (politics).

In his speech, Pawan expressed his love and admiration for his annayya and said that he is a great fan of Chiranjeevi. Stating that he has always had immense respect for his elder brother, Pawan said to a rousing response from fans that Chiru annayya will always be in his hearts and owed his career to him and his sister-in-law.