Sarileru Neekevvaru’s title song is a fitting tribute to soldiers
Published on Aug 15, 2019 8:05 am IST 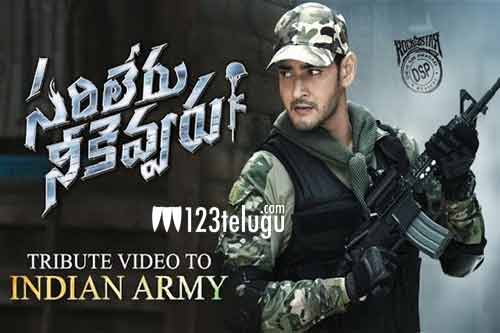 The much-awaited title song from Superstar Mahesh Babu’s ongoing 26th film, Sarileru Neekevvaru, is out this morning. The 2 and a half minute song pays a fitting tribute to the Indian Army soldiers on this Independence Day.

Sarileru Neekevvaru’s title song features inspiring lyrics showcasing the invaluable sacrifices made by our soldiers for the country. Photographs of the soldiers who took part in the victorious wars and Mahesh Babu as Major Ajay Krishna prominently feature in the song. The song is penned and composed by Devi Sri Prasad and crooned by Deepak Blue.

Anil Ravipudi is the director of Sarileru Neekevvaru. Rashmika Mandanna is the film’s leading lady and Vijayashanthi plays a key role. Anil Sunkara is bankrolling this most eagerly awaited film, while Dil Raju and Mahesh Babu are jointly presenting it. The film is slated to release for Sankranthi early next year.