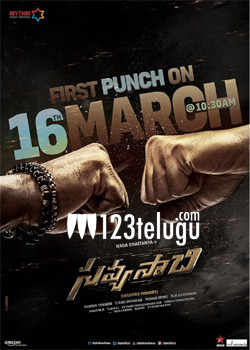 Ever since the announcement of the title, Naga Chaitanya-starrer Savyasachi has been grabbing a special attention from all quarters. Savyasachi (Ambidexter) is the one who can use both his hands with equal power and skill. Similarly, in Savyasachi, Chaitanya will have the skill of using both his hands effectively.

Savyasachi is progressing at a brisk pace. The latest update is that the ‘first punch’ of the movie will be blown on March 16 at 10:30 am. Chandoo Mondeti is directing this high concept thriller. Expectations are quite high on the Chay-Chandoo duo, which is reuniting after delivering a super hit in the form of Premam.

Bollywood starlet Nidhhi Agerwal is the film’s leading lady in Savyasachi. Madhavan is playing a key role in the movie and Bhumika will be seen as Naga Chaitanya’s sister. MM Keeravani is composing the music. Mythri Movie Makers is bankrolling the project. Savyasachi is slated to open in cinemas later this summer.