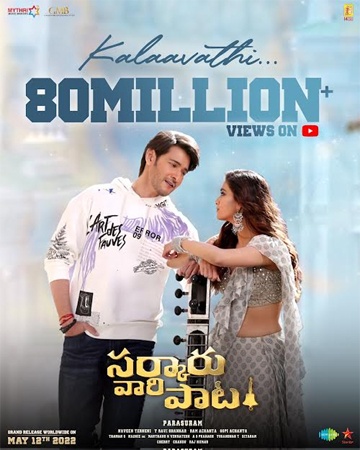 The first song from Mahesh Babu’s upcoming movie, Sarkaru Vaari Paata is unstoppable. Titled Kalaavathi, the song has been
ruling the charts.

Today, the melodious track has crossed more than 80 million views and is marching towards a record milestone. Composed by Thaman A, the song has the soothing vocals of Sid Sriram and soulful lyrics of Anantha Sriram.

Keerthy Suresh is the leading lady in this movie, which is directed by Parasuram Petla. Produced by Mythri Movie Makers, GMB Entertainment and 14 Reels Plus, the movie is all ready to release in theaters on May 12, 2022.